I collect sports memorabilia, I happen to have these two along with Yogi’s catcher’s mask in my living room, all signed and authenticated. 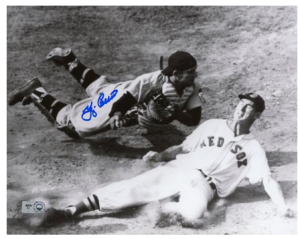 Mounted in a glass cage.

Some of the sayings below are attributed to Yogi, when factually they aren’t.  I’ve looked them up, so can you or just keep believing, “The Game ain’t over until it’s over. 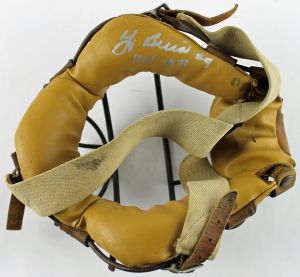 5. No one goes there nowadays, it’s too crowded.

6. Baseball is ninety percent mental and the other half is physical.

7. A nickel ain’t worth a dime anymore.

8. Always go to other people’s funerals, otherwise they won’t come to yours.

9. We made too many wrong mistakes.

10. Congratulations. I knew the record would stand until it was broken.

11. You better cut the pizza in four pieces because I’m not hungry enough to eat six.

13. I usually take a two-hour nap from one to four.

16. How can you think and hit at the same time?

20. If the people don’t want to come out to the ballpark, nobody’s going to stop them.

23. Why buy good luggage, you only use it when you travel.

24. You’ve got to be very careful if you don’t know where you are going, because you might not get there.

25. All pitchers are liars or crybabies.

26. Even Napoleon had his Watergate.

27. Bill Dickey is learning me his experience.

28. He hits from both sides of the plate. He’s amphibious.

29. It was impossible to get a conversation going, everybody was talking too much.

30. I can see how he (Sandy Koufax) won twenty-five games. What I don’t understand is how he lost five.

31. I don’t know (if they were men or women fans running naked across the field). They had bags over their heads.

32. I’m a lucky guy and I’m happy to be with the Yankees. And I want to thank everyone for making this night necessary.

33. I’m not going to buy my kids an encyclopedia. Let them walk to school like I did.

34. In baseball, you don’t know nothing.

35. I never blame myself when I’m not hitting. I just blame the bat and if it keeps up, I change bats. After all, if I know it isn’t my fault that I’m not hitting, how can I get mad at myself?

39. I wish everybody had the drive he (Joe DiMaggio) had. He never did anything wrong on the field. I’d never seen him dive for a ball, everything was a chest-high catch, and he never walked off the field.

43. The towels were so thick there I could hardly close my suitcase.

44. Little League baseball is a very good thing because it keeps the parents off the streets.

45. Mickey Mantle was a very good golfer, but we weren’t allowed to play golf during the season; only at spring training.

47. I’m lucky. Usually you’re dead to get your own museum, but I’m still alive to see mine.

“You can observe a lot by watching.”

“Always go to other people’s funerals; otherwise they won’t go to yours.”

“I really didn’t say everything I said.”

“A nickel ain’t worth a dime anymore”

Where misinformation stops and you are force fed the truth III

"If you put the federal government in charge of the Sahara Desert, in five years there'd be a shortage of sand."~Nobel Laureate in Economics~Milton Friedman Ph.D~

I share my thoughts,Political views things I find around the web and on occasion been known to express my religious views

I was born in a country grounded in Christian principles. Not sure what kind of country this is, anymore. The Change is caustic.