Louis Armstrong was brought up poor and later in life became politically active failing to cow-tow to politicians who did little or nothing for civil rights.

He could have become a bitter man, but instead, he chose to make where we live, a “Wonderful World.” 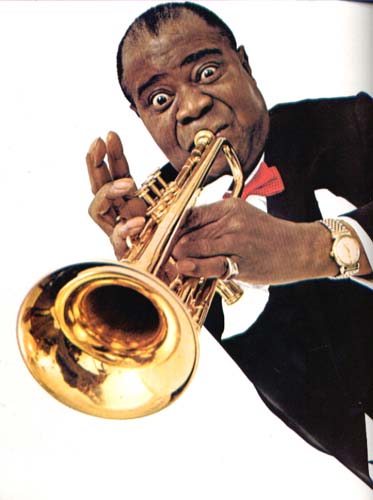 Satchmo became Armstrong’s nickname after his 1932 Grand Tour of Europe.

A London music magazine editor wrote “Satchmo” in an article — probably because he could not read his garbled notes. Up until that time, Armstrong’s nickname was Satchelmouth. 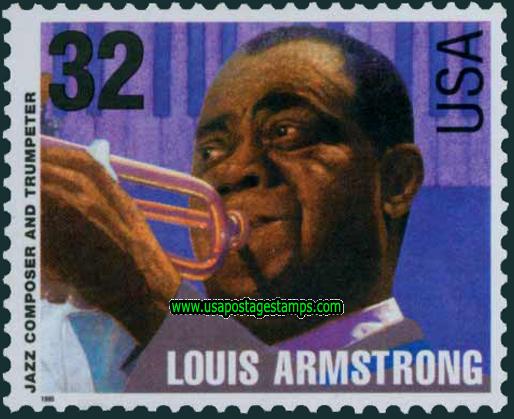 Pictured on a 32¢ US commemorative postage stamp in the Legends of American Music series, issued 1 September 1995.

Posthumously inducted into the Rock and Roll Hall of Fame (1990) (under the category Early Influence).

Posthumously inducted into the Big Band and Jazz Hall of Fame (1978) (charter member).

He was nicknamed “Pops” because that is the name he addressed everyone by.

Later on in his career, he picked up the sobriquet “America’s Jazz Ambassador” because of his frequent jazz concerts around the world.

For most of his life, Louis Armstrong always gave July 4, 1900, as his birthdate, possibly because it was easy to remember.

In all likelihood, he probably believed it himself.

It wasn’t until many years after his death that a birth record was found confirming the correct date on August 4, 1901.

Although his career as a recording artist dates back to the 1920s, when he made now-classic recordings with Joe ‘King’ Oliver, Bessie Smith and the legendary Jimmie Rodgers, as well as his own Hot Five and Hot Seven groups, his biggest hits as a recording artist came comparatively late in his life.

Interestingly enough, Armstrong had never heard of either the song or show “Hello, Dolly!” when he recorded it.

To him, it was just the lead song on an album of show tunes, and he was more surprised than anyone when both the single and the album (Kapp 1964) went to #1 on the Billboard charts.

What makes this accomplishment all the more remarkable is that it happened at the height of the so-called “British Invasion”, when The Beatles and other British rock groups seemed to be dominating every aspect of the pop music charts.

Although the term didn’t exist during his lifetime, there is much evidence to indicate that he may have been bulimic.

He believed that it didn’t matter what you ate, as long as you purged yourself regularly afterward.

He would do that with the help of an herbal laxative called Swiss Kriss and even handed out mimeographed sheets on his diet regimen to friends.

In all probability, this contributed to the health problems he suffered in the last years of his life.

Refused to go a State Department-sponsored concert tour of the Soviet Union in 1959 because he felt the administration of President Dwight D. Eisenhower wasn’t doing enough to promote civil rights legislation.

Embittered by the treatment of blacks in his hometown of New Orleans, he chose to be buried in New York City.

The slang terms “cat” meaning a man about town and “chops” meaning a musician’s playing ability was first coined by him.

Louis Armstrong passed away on July 6, 1971, a month away from what would have been his 70th birthday on August 4. 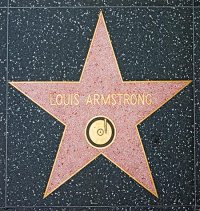 He was awarded a Star on the Hollywood Walk of Fame for Recording at 7018 Hollywood Boulevard in Hollywood, California on February 8, 1960.

Doc Louis, the trainer character in the boxing video game Mike Tyson’s Punch-Out!! (1987), is based on his likeness.

When he died, his home was in the Corona section of Queens County, New York City.

Today, it remains a museum where fans can check out his residence and its belongings as a citizen of New York City.

He was laid to rest at the Flushing Cemetery, Section 9 in Flushing, Queens, New York City not too far from his home in Corona, Queens. 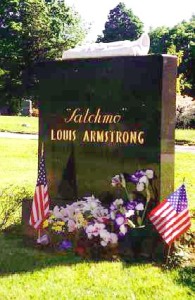 His tombstone is a red granite, emblazoned simply “Satchmo” Louis Armstrong with a beautiful white trumpet figure laden on top.

Buried with him is his last of four wives, Lucille Armstrong who died in 1983.On June 26, 1950, he recorded the first American version of the French songs “La Vie en rose” and “C’est si bon.”

Buried with him is his last of four wives, Lucille Armstrong who died in 1983.On June 26, 1950, he recorded the first American version of the French songs “La Vie en rose” and “C’est si bon.”

The recording took place in New York with Sy Oliver and his Orchestra.

Was good friends with Ella Fitzgerald.

Posthumously inducted into the Louisiana Music Hall of Fame (2007).

Posthumously inducted into the Long Island Hall of Fame (2008). (Source)

In The News Feed.

Your trusted source for today's News. Covering what the Mainstream Media doesn't. US News, World News, Politics and Commentary.