Muslims in America as they are: Still practicing honor killings under Sharia

It’s well past time that Democrats in Congress work with Republicans to designate CAIR a terrorist organization.

Their are many forms of Jihad, certainly CAIR would fall under the category at minimum of stealth jihad as the represent the money laundering arm for terrorism.

An FBI chart has surfaced depicting connections between the Council on American Islamic Relations (CAIR) and the Palestinian terrorist group Hamas.

Obtained by the Investigative Project on Terrorism (IPT) via a Freedom of Information Act (FOIA) request, the chart shows CAIR falling under the umbrella of the jihadi outfit. 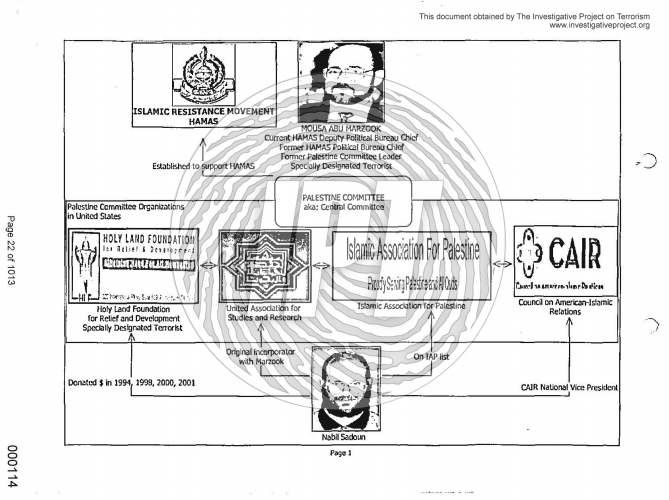 This FBI chart details the Hamas-related groups, which included CAIR, that were created to ultimately support the Palestinian terrorist organization.

The IPT also obtained groundbreaking new Freedom of Information Act (FOIA) documents that trail CAIR back to its roots as a subversive Hamas-related group.

In 2007, CAIR was named as an un-indicted co-conspirator in the Holy Land Foundation (HLF) trial, a Hamas financing case that would result in the FBI ceasing its working relationship with CAIR.

The HLF trial was the largest terror-financing case in American history. In 2008, during a retrial of the HLF case, an FBI Special Agent labeled CAIR as “a front group for Hamas” during her trial testimony.

In 2010, a federal judge reiterated that his court had “ample evidence” that CAIR was involved in “a conspiracy to support Hamas.”

CAIR, which relies upon millions of dollars in Saudi cash, was recently listed by the United Arab Emirates (UAE) as a terrorist organization.

The group, which fashions itself as a civil rights voice for American Muslims, was founded by members of the Palestine Committee (PALCOM), an organization “established to support Hamas,” according to the chart.

The FBI declaration submitted in connection with removal proceedings for Nabil Sadoun (a former top CAIR official) said PALCOM members used coded language to discuss the “true nature” of their clandestine operations in support of Hamas.

During a Philadelphia conference, which was being wiretapped by the FBI, they “referred to Hamas as ‘Samah’–Hamas spelled backwards–or simply as ‘the Movement,’” the FBI declaration said.

“It is clear that the true nature of the PALCOM meeting was to discuss the means to support Hamas’ goal to undermine the peace process (between Israel and the Palestinians) and to thwart law enforcement in the United States,” the FBI declaration read.

According to the FBI declaration, attendees of the Philly meeting “discussed how ‘Samah’ would one day be labeled as a terrorist organization by the US government,” the document said, adding they “discussed the need to create a new, uncompromised front group in the United States under the veil of some cover palatable to the American public.”

CAIR was “subsequently founded” after the Philly Conference, where attendees discussed the “need to create a new front organization” for Hamas, the FBI declaration said, with PALCOM tasking Omar Ahmad and Nihad Awad to chair the Council on American-Islamic Relations (CAIR).

A third founder, Nabil Sadoun, would join shortly thereafter as Vice-Chairman of CAIR.

According to the FBI, Sadoun was a member of the Muslim Brotherhood and “was affiliated with Hamas.”

Sadoun was also involved with other organizations that solicited funding for Hamas.

At one point, he brought Hamas chairman Khaled Mashaal to keynote a conference in Oklahoma City, the FBI declaration reveals.

Before becoming CAIR’s Vice-Chair, Sadoun was motivated by violent jihad, IPT found. Asked about the Middle East conflict with “the Jews” (Israel) in a 1993 interview, Sadoun described the conflict as “the first priority for Muslim[s] until the Holy Land is liberated and the backbone of the Jews is broken.”

He also discussed “raising the spirit of jihad and the struggle amidst the Palestinian people… to form a tight Islamic front to face the Zionist Existence and put an end to it.”

Sadoun would later be deported from the country, ordered removed from the U.S. by an Immigration Court after authorities alleged he lied about his affiliation with organizations linked to the Muslim Brotherhood and Hamas.

They were listed as co-conspirators in the Holy Land Foundations trials.

The Muslim women saying their piece in the video below are wasting their time singing to a deaf church.

Their time would be better spent attempting to explain to all of America that they are moderate Muslims, though their failure to assimilate and continuing to wear the hijab would show a more of an “In your face attitude, toward trying to fit in.

The images of the women above were all killed in the U.S., victims of honor killings.

Certainly no one at this site condones killing anyone.

Yes there the unbalanced among us, including Muslims who kill without thinking twice as shown by Sharia killing in the United States.

Are we to believe the discussion below?

A simple question, why make themselves needles targets and refuse all attempts to fit in?

The answer to the uninitiated is simple, they have no intention to blend in to American society.

Honor killing in America: DOJ report says growing problem and is hidden in the statistics. (Source)

A set where the show was filming in Chicago included some typical Muslim stores as well as a Chicago PD Bomb Squad truck parked outside them, which  “outraged” Ahmed Rehab, the Muslim executive director for designated terrorist group CAIR in Chicago.

Chicago Sun Times  A politely worded notice informed folks in Edgewater that the TV show “Chicago PD” would be filming scenes in the neighborhood and that crews would do their best to avoid disturbing residents.

But the pink sheets of paper didn’t say exactly what the popular TV show would be filming — something that’s elicited everything from groans to outrage among some in the local Muslim community.

The scenes, which according to the posting were to be shot between Oct. 2-4, included a fake “Hookah café and Lounge,” as well as a Middle Eastern rug store and signs in Arabic. One photograph shows a van with “Chicago Police Bomb Squad” written on it.

Rehab said he didn’t see the set himself, but had seen pictures posted on Facebook, which drew dozens of comments — with at least one person threatening to boycott the show.

A source close to production said “Give this the benefit of the doubt because the story does deal with[the Muslim community.”

“We definitely want to represent all cultures accurately and authentically.

And we used the same level of detail for this particular episode.”

“I don’t think this is going to be [an episode] about the good old shopkeeper who puts out water for the alley cats,” Rehab said.

“It’s probably going to be a terrorists’ sleeper cell.”

Rehab said the gibberish Arabic is “an indication that they did not consult anyone who knows anything about the culture.” Rehab said CAIR would likely respond with a commentary on their website.

I am firmly devoted to bringing you the truth and the stories that the mainstream media ignores. This site covers politics with a fiscally conservative, deplores Sharia driven Islam, and uses lots of humor to spiceup your day. Together we can restore our constitutional republic to what the founding fathers envisioned and fight back against the progressive movement. Obama nearly destroyed our country economically, militarily coupled with his racism he set us further on the march to becoming a Socialist State. Now it's up to President Trump to restore America to prominence. Republicans who refuse to go along with most of his agenda RINOs must be forced to walk the plank, they are RINOs and little else. Please subscribe at the top right and pass this along to your friends, Thank's I'm J.C. and I run the circus
View all posts by JCscuba →
This entry was posted in Muslims in America as they are still practicing honor killings under Sharia and tagged CAIR, conservative blog network, Council on American-Islamic Relations, Hamas, honor killings, Honor killings practiced in the U.S. under Sharia, islam, Israel, jihad, Jim Campbell's WethePeople, Middle East, Middle EastNational Security, Muslim Brotherhood, Sharia, terrorism, those following sharia must be tried and convicted, who do we believe?, worpress.com. Bookmark the permalink.

4 Responses to Muslims in America as they are: Still practicing honor killings under Sharia

In The News Today: Your trusted source for today's news. Covering US News, Politics, World News, Commentary/Opinion and Video Post.