The democrats must be fearing a great deal more about Trump than his argument on terrorism.

Factually, with one night remaining, their recently failed debacle in Philadelphia, demonstrated they are a party with no vision.

They cling to the past and have chosen for their flag barer a woman of woeful character with little chance of winning the general election unless voter fraud is rampant and the election is stolen.

They are the ones who treated their viewers and attendees to the proverbial circular firing squad. 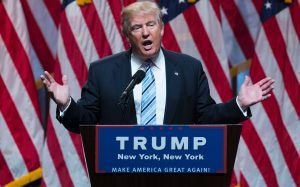 Should that be the case do not look for the next four years to be peaceful.

While they and their useful dupes in the media attempted to paint the Republicans as a party in disarray, do they really think we are blind to the Bernie Sanders factor and how they literally made sure that Hillary would be their nominee? (Source)

PHILADELPHIA — Prominent Democrats are worried their party will be painted as soft in the fight against terror.

Terrorism had hardly been discussed publicly at the Democratic convention – until Wednesday night’s series of national security speeches – but in private settings, fears about Donald Trump‘s use of the issue circulated among the party’s elite.

Noting polls that show Trump has a significant edge with voters on issues of national security and terrorism, Democrats worry he could defeat Hillary Clinton with the argument that she and her party have been too passive in the fight against ISIS.

A major domestic terrorist attack on the homeland, or even the continued steady drumbeat of foreign beheadings and suicide bombings, could be all that Trump needs to win the presidency, many top Democrats fear.

At a private donor breakfast on Wednesday at the Westin hotel in downtown Philadelphia, Sens. Richard Blumenthal (D-Conn.) and Brian Schatz (D-Hawaii) were asked by a concerned guest about how Democrats can look strong on terrorism.

Both Schatz and Blumenthal expressed worries over the potency of Trump’s argument that he was tougher on terror, according to a source who attended.

Schatz conceded that terrorism was not “traditional terra firma” for Democrats, while Blumenthal said Democrats needed to be alert to the fact that Republicans always demagogue them for being soft on terror, the source added.

Schatz told the donors they should expect that Republicans will use hundreds of millions of dollars to frame the election around terrorism and convince Americans that only a “fascist” strong man could keep them safe.

****Trump a “Fascist strong man?” only in the minds of the easily deceived.

He added that polling data shows that characterizing Republicans with the specific word “reckless” is highly effective.

Concerns that Democrats could be rhetorically outmaneuvered on terrorism are shared widely among those at the convention, whether they be elected officials, pollsters, strategists or fundraisers.

“Anyone that supports Hillary, both donors and anyone else I talk to, recognize that Trump’s strategy, to prey on people’s fears, is dangerous and concerning,” said Patrick Guarasci, a Clinton and DNC fundraiser, in an interview with The Hill on Wednesday at the Ritz Carlton hotel in downtown Philadelphia.

“We must win this election, but we must also defeat this idea.”

Hillary Clinton’s campaign is keenly aware of the political dangers; and they’re taking nothing for granted based on speeches given on the third night of the convention.

Wednesday night’s speeches – in stark contrast to the earlier nights of the convention in which terrorism and ISIS were hardly mentioned – were dedicated to the theme of national security.

“As always planned, we continue prosecuting the case tonight over who is best to keep our country safe,” a Clinton aide told The Hill.

Speakers heavy on national security and foreign policy credentials, including vice-president Joe Biden and former CIA director and Defense Secretary Leon Panetta, portrayed Clinton as experienced and prepared, and Trump as temperamentally unfit to be commander-in-chief.

“No major party nominee in the history of this nation has ever known less or has ever been less prepared,” Biden said.

“Donald Trump, with all his rhetoric, would literally make us less safe.”

Part of the Democratic strategy is portraying Trump as a lapdog to Russia’s president Vladimir Putin — a storyline helped by Trump’s controversial comments on Wednesday in which he encouraged Russian hackers to obtain and release the 30,000 emails from Clinton’s time as secretary of State that her lawyers deleted from her private email server.

“Today, Donald Trump once again took Russia’s side. He asked the Russians to interfere in American politics,” Panetta said.

“Think about that for a moment. Donald Trump is asking one of our adversaries to engage in hacking or intelligence efforts against the United States to affect our election.”

Panetta wasn’t the only speaker to play off of Trump’s Russia comments.

But some of these tough messages – particularly during Panetta’s speech – were undermined by anti-war protesters in the convention hall, who drowned him out with chants of “No more war!”

Polls show a tightening race between Trump and Clinton, and a series of terrorist attacks have given Trump something to talk about.

“The voters are very concerned and rightfully so because they look on a daily basis and things that used to happen once every five years seem to be happening once every five days,” said Democratic pollster Peter Hart.

Trump leads Clinton 44 to 39 among registered voters on the question of who can be trusted to handle terrorism, according to the NBC/Wall Street Journal poll taken from June 19-23.

In the CNN/ORC poll taken from July 22-24, Trump led Clinton by double digits on the question of who would better handle terrorism.

When the question asked concerns foreign policy, Clinton leads Trump by five points in the same poll. But Democratic strategists and pollsters aren’t comforted by this; they know that voters are far less motivated by diplomacy and foreign policy than they are by the fear of terrorist attacks.

And fears appear to be growing.

In the same June NBC/WSJ poll cited above, a lumping together of “national security and terrorism” was judged the top priority issue by 28 percent voters, making it the issue of greatest concern, even ahead of “job creation and economic growth,” which was the first choice of 22 percent of voters surveyed.

A little over a year earlier, in April 2015, those issues were reversed in the same poll. Job creation and economic growth was the top issue, eight points ahead of national security and terrorism.

These lopsided terrorism numbers might not have provoked much anxiety three months ago, when Clinton led Trump by 11 points in national polls and pundits were confidently predicting a blowout.

I am firmly devoted to bringing you the truth and the stories that the mainstream media ignores. This site covers politics with a fiscally conservative, deplores Sharia driven Islam, and uses lots of humor to spiceup your day. Together we can restore our constitutional republic to what the founding fathers envisioned and fight back against the progressive movement. Obama nearly destroyed our country economically, militarily coupled with his racism he set us further on the march to becoming a Socialist State. Now it's up to President Trump to restore America to prominence. Republicans who refuse to go along with most of his agenda RINOs must be forced to walk the plank, they are RINOs and little else. Please subscribe at the top right and pass this along to your friends, Thank's I'm J.C. and I run the circus
View all posts by JCscuba →
This entry was posted in Dems fear Trump arguments on terrorism and tagged DEMS FEAR TRUMP IN MANY AREAS BESIDES TERRORISM, DEMS HAVE NO PLATFORM, DNC Circular Firing Squad, DONALD TRUMP A FASCIST? CONSERVATIVE BLOGNETWORK, JIMCAMPBELL'SWETHEPEOPLE, wordpress.com. Bookmark the permalink.

In The News Today: Your trusted source for today's news. Covering US News, Politics, World News, Commentary/Opinion and Video Post.